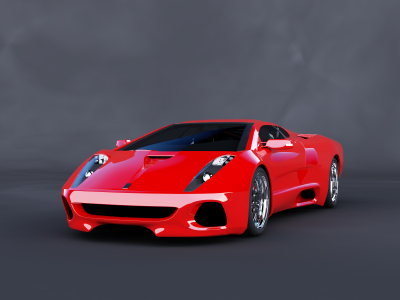 For most of us, our cars are simply a means of transportation between home, work, and school. For some individuals, however, cars are not this utilitarian—instead; they are a means of self-expression. To these people, price often does not make a difference when it comes to the purchase of a new vehicle. In fact, buying a car that costs $1,000,000 or more is not unheard of. Individuals who are interested in the obtainment of a particularly special vehicle may want to consider the purchase of one of the cars described below, many of which are considered to be the most famous of all time.

Prior to the 1960s, Ferraris’ where identified by their front-engine layouts, which traditionally had been proven successful at international races around the world. In 1962, however, Ferrari engineers made a bold move and repositioned the engine of the 250 LM in the center of the vehicle body. Unease about this dramatic move limited production of the vehicle, with manufacturers eventually building only 32 250 LMs. The low production number of this car was paramount to its high selling price, yielding a final bid of $6.9 million at auction in 2008.

Like the Ferrari 250 LM, the Shelby Daytona Cobra Coupe was designed specifically for auto-racing. While Shelby and Ferrari had been battling in European auto races for years, it was not until the production of the Cobra Coupe that the United States-run car manufacturing company was able to beat the iconic Italians racing team. In 2009, the fourth Shelby Daytona Cobra Coupe was sold at auction, with a final bid of $7.25 million. To this day, that is the highest sale price of an American automobile at a public auction of all time.

Built in 1904, the Rolls-Royce 10 HP is one of the oldest cars of all time. Featuring 10 horse power, a 1.8 twin-cylinder engine, wooden spoke wheel, and brass headlights, it is the epitome of a classic car. While this car received some updates in the 1930s, it was restored to its original specifications by a car-enthusiast in the 1950s. It is currently the oldest-known Rolls-Royce in existence, and despite its age, yielded a staggering sale price of $7.3 million at auction.

Historically, Mercedes-Benz has produced cars that are long and lean. Designer Ferdinand Porsche instituted a dramatic change in design, however, with the development of the 38/250 SSK, which was surprisingly short and compact. In fact, the car was so unique that it earned a special nickname—Super Sport Kurz, or short, in German—which eventually made its way into the formal identification name of the vehicle. The most recently auctioned 38/250 SSK was sold in 2004, and after nearly 75 years of ownership still featured nearly all of its original parts. It is no surprise that this classic vehicle fetched $7.4 million at auction!

Like many of the other vehicles described previously, the Bugatti Type 57SC Atalante was originally designed for racing. With dramatic fenders, riveted body panels, and a unique roof, the Atalante definitely stood out from the competition. In addition to its unique exterior, the Atalante also featured a 3.3 liter eight-cylinder engine, which could produce as much as 170 horsepower. Limited production and a unique styling to each Type 57SC Atalante produced resulted in a 2008 auction price of nearly $8 million.

Originating in France, the Bugatti Corporation has a reputation for producing some of the most expensive, luxurious, and fastest vehicles on the planet. With its 12.7 liter straight-eight engine, the Bugatti Type 41 Royale Kellner is no exception. In addition to its large engine, the Type 41 Royale Kellner featured a 15-foot wheelbase and an auction price tag of almost $10 million. Today, the Bugatti Corporation has been taken over by the Volkswagen Group, who continue to manufacture vehicles under the Bugatti name.

The Ferrari 250 GT SWB California Spyder is considered by many car buffs to be the embodiment of the classic sports car. With its long hood, drop top, two seats, and 3.0 liter V-12 engine, it is no surprise that this car is desired by many individuals around the world. In addition to its impressive features, its appearance in the film Ferris Bueller’s Day Off makes it one of the most recognizable vehicles currently in existence. Up until 2009, it held the record for the highest-yielding sale price for a vehicle at auction.